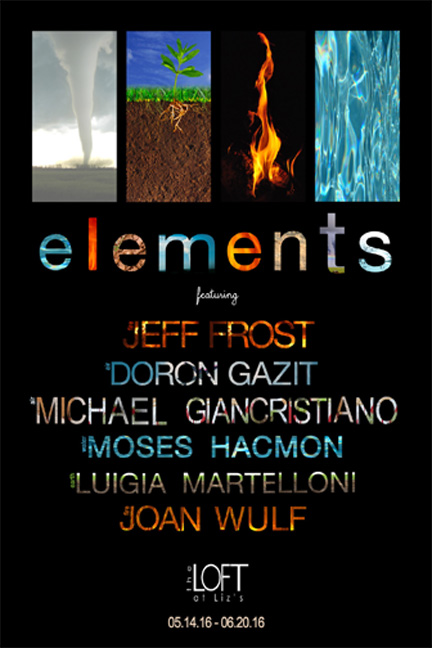 The Loft at Liz's

A fifth element, sensory experience, was added by Aristotle which became the basis for Hinduism, Buddhism and Taoism.

Eastern countries such as Japan, China, Tibet and also Greece believe the fifth element to be metal.

"Barren Inertia" was succesfully installed at the ESA San Diego Branch. The art is being rented for 1 year with an option to buy thanks to some crafty work by Southern California Art Brokers, Kat Cheema and Sharon Berg of Art Soup L.A.

ESA is an environmental science and planning firm of more than 350 professionals in 12 offices across the Western United States and Florida. They specialize in all aspects of project planning, environmental analysis and assessment, and regulatory compliance.

Dave Barton from OC-WEEKLY gave the show a favorable review.

Revolutions: The Inexorable Evolution of Art

Revolutions was launched in Calgary, Alberta Canada at Endeavor Art Gallery and traveled to Ottawa for the CSS Annual Space Summit, before moving on to Toronto and Montréal in 2014. This year (2015) the exhibit will be appearing at CSS events in Winnipeg and Vancouver.